Crab in the Barrel

Apparently, I had the concept of the crab in the barrel a little misinterpreted and it took until Dec. 18th of my 30th year (2012) to actually get the meaning. Not that I feel that my interpretation probably wouldn't work in my case, but I was under the impression that being a crab in the barrel meant "stepping over people to get to the top." Growing up, the meaning of the saying was never explained to me, so I interpreted my own meaning and figured that I did a pretty good job deciphering a logic behind it. But then, I came across this video about leadership and a speaker by the name of Craig Valentine speaking about negativity explained how when crabs are in a barrel and one crab is clamoring to get out over the top, the other crabs grabs and pulls it back in. It is as if it is saying, "hey, where are you going?" He went on to say that this is how negative people are. They always end up finding a way to bring you back in the barrel if you allow them to.

As a society, we are groomed to see things from a negative, pessimistic outlook. We all have it in us (self included). What ends up happening is that our negative organs seem to outsize our positive organs and becomes poisonous not only in our own lives but in the lives of other people that we interact with.

Negativity can happen overtly or covertly, but the end result has the potential to end detrimentally. Oftentimes, the most dangerous form of negativity is negativity in disguise. It is doctored up in makeup, and all the fixings that makes it seem appealing, then "BOOM!" the bomb drops.

I've been in the midst of negativity all of my life, from outside factors to my own negative inputs; and I have been a witness to the ill effects that it has had through my family, in my relationship, with my friends, and between total strangers. So, I've been choosing to change my outlook, and see promise, purpose and positivity in all that I do and all that is around me. It is hard but it is possible, because there is one additional thing that I learned yesterday, and it is that "negative people would rather change who you are instead of changing who they are." I know it all starts with me, and it also begins with you.

Dont be the crab in the barrel! 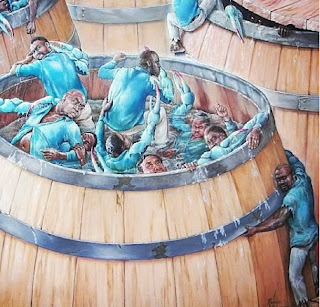